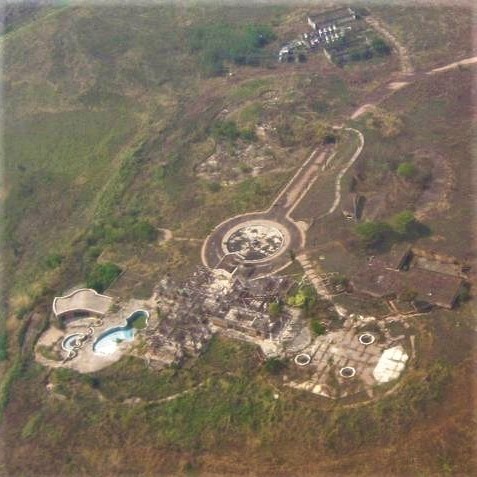 Versailles in the Jungle – a Despot’s Mad Extravagance

Versailles in the Jungle – a Despot’s Mad Extravagance

During Mobutu’s reign, he hosted many international statesmen, Pope John Paul II, Pat Robertson (American Evangelist), and various businessmen including William Casey (Director of the CIA). Mobutu was skilled at playing the US against the USSR, during this Cold War period. He successfully kept the USSR out of Central Africa’s natural wealth. After the collapse of Soviet Russia, Mobutu fell out of favor with the US and at home and he fled the country in 1997.The rebels trashed his beautiful city, leaving the Coca-Cola plant to become a UN logistics base, the unfinished Water Ministry building became a school, the cinema and the airport abandoned and the hotel remained functioning but impoverished and run down. The remaining building, pools, columns and streets have been taken over by the surrounding jungle.The city still has residents, mostly Mobutu loyalists, who cater to tourism of the historic site.

Of note, Mobutu organized an international sporting event in 1974 in the capital of Kinshasha .known as the “Rumble in the Jungle”, the heavily publicized boxing match between Muhammad Ali and a young George Foreman. Mobutu paid each boxer $5 million for the event which he used to promote his country. Ultimately Ali won the match, defeating the younger pugilist in a brilliant tactic called “rope a dope” by forcing Foreman to tire himself out and Ali coming off the ropes in the 8th round in front of the 100,000 spectators and knocking Foreman out. The tie to Gbadolite? Ali trained there, he met his illegitimate wife there also and celebrities were ferried back and forth to Kinshasha for the fight and celebrations.

As seen time and time again, once a despotic leader is out of power, their achievements and developments become the target for vandals, looters, economic and environmental changes. It is estimated that Mobutu’s corrupt rule made between $5 billion-15 billion. His indulgences were excessive yet his Versaille in the Jungle, now a skeleton of what it once was, has not weathered well with time.

Thanks to Dr. Beth Sommer
Photos courtesy of Sean Smith