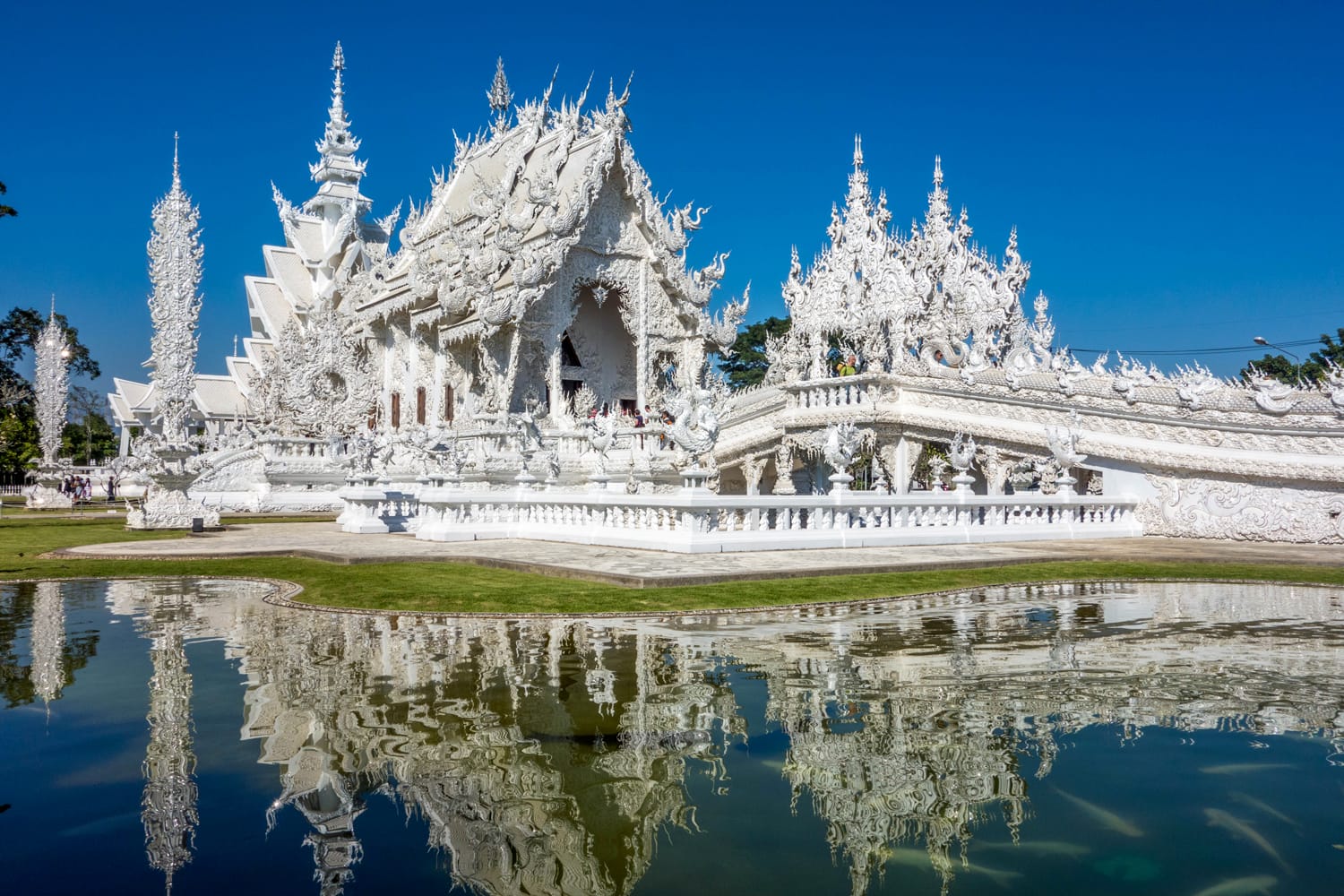 In the 20th century Wat Rong Khun was in a state of decay. Although restoration had commenced, it was soon halted due to lack of funds. Enter Chalermchai Kositpiptat, renowned Thai artist, born in Chiang Rai who acquired the property and funded the rebuild of the temple complex himself. Opened to visitors in 1997, it was the victim of an earthquake in 2014. After a structural evaluation, Chalermchai proceeded on another massive restoration. The temple site when completed will have a total of nine buildings. Quoting Chalermchail: “Only death can stop my dream, but cannot stop my project.” It appears that in our lifetime, the work will not be complete as it is scheduled to be finished in 2070.

Approach to the Ubosot

It has been said that there are over 30,000 Buddhist temples in Thailand and only one that is privately owned, namely Wat Rong Khun;
Nine buildings will ultimately grace the site some of which include the “Ubosot” (the white temple or ordination hall), a meditation hall, art gallery, a hall of relics, and the existing golden building (rest rooms);
The brilliant exterior effect of the main building was achieved by using pieces of mirrored set in the stucco;
The Ubosot is entered via a pedestrian bridge over a small reflecting pond representing rebirth. On the approach, one is confronted with several hundred hands reaching towards the sky as a symbol of “unrestrained desire”, and offering in inkling of what is to come next;
Wheras the exterior pays homage to classic Thai architecture with its three-tiered roof and decorated with several “Naga” (protectors of Buddha) serpents, the interior is pure theatric and art gallery – blazing murals are everywhere mixed in with kitschy Hollywood memorabilia. The message ? “People are wicked”. (sorry folks, no interior images allowed).

This is an unusual example where the Owner is both the Artist and Architect
and the symbiotic integration respecting one’s cultural history yet at the same time exercising one’s creative vision is uniquely portrayed;

In Thailand, a Buddhist Artist is Building the Bizarre Temple of His Dreams
– Mitch Sawyer
A Tour of Wat Rong Khun, the Oddest Temple in Thailand – Slate
Numerous travel articles on the internet