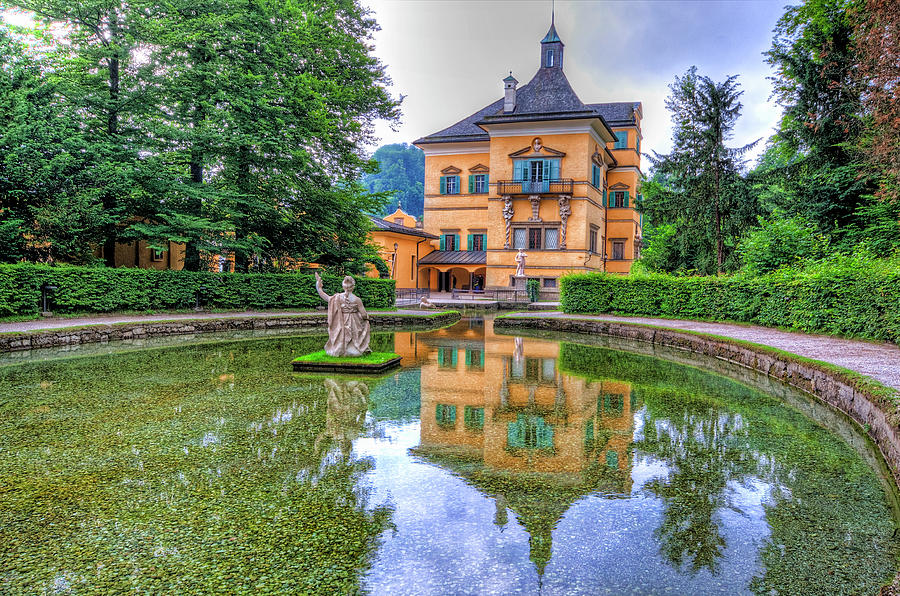 The inspiration for Hellbrun was instilled in Sittikus from a very young age when he travelled to the country estate of the Medici family, Pratolino outside of Florence. This estate, finished in 1575 was set in an expansive park with 2 artificial streams operating numerous automata (mechanical robots). Just after his election as Archbishop in 1612, Sittikus purchased 60 hectares (148 acres) on the outskirts of Salzburg complete with a clear spring that traversed the property known as the Hellbrum or “healing spring”. Several people contributed to the design of the complex, but it appears to be a Fra Giachino who was the mastermind behind the technical aspects of the waterworks.

Sittikus was a jokester. He designed features into the Park, not just to delight but also to physically dampen his guests. The park boasts too many features to go into detail here, but I will highlight them as they are significant. Several pools, trick fountains and statuary are spread through the park. A stone dining table that sprays guests as they are seated. 5 small grottos on the Royal Way depiciting mythical and local artistan scenes. 5 animated grottos (Neptune, Ruins, Shell, Mirror and Bird Calls). The Rock Theater carved out of a former quarry. The Garden Pavilion which was the locale for the song “Sixteen Going on Seventeen” from the Sound of Music.The Little Month Palace, but in 1 month at the suggestion of a guest. And of course the ‘tour de force’ the Mechanical Theater added in 1750 with over 200 automata tiny figures portraying a day in the life of a Baroque village.

400 years later, Hellbrun still awes and inspires. Its mere existence rivals the creativity and ingenuity of any modern Disney park. In order to create kinetic scenes, the designers had to innovate with the only source available to them – moving water. By comparison, today’s imagineers have such a wide palette available to them.

Classically, think visionaries such as Archimedes, Virtuvius and more recently, Leonardo daVinci – they set the bar for future generations to raise and exceed. Quoting from the website, “The art of machines appeared to be a “divine art”, similar to a crowning imitation of nature, even triumph over it”

thanks to Jane Sixsmith