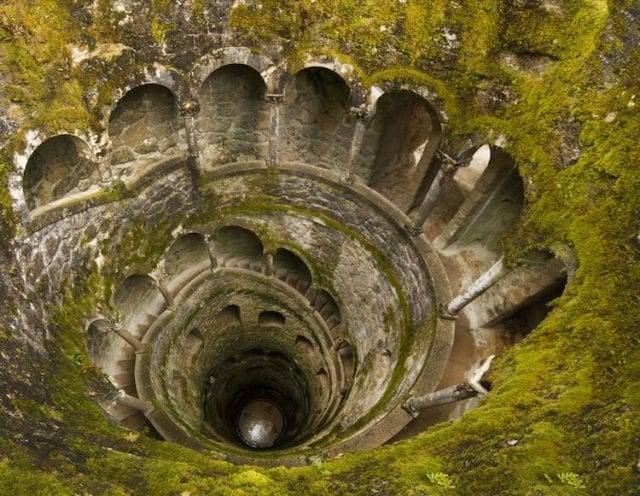 Quinta da Regaleira, aka Palace of Monteiro the Millionaire

Palace of Monteiro the Millionaire

– Sintra and the Quinta have been labeled the most fairytale place to visit on the face of the earth;
– there are many key attractions on the property, perhaps the most important is the Palacio, designed in the Manueline style…. but don’t underestimate the significance of other major features on the estate;
– the 4 ha. (10 ac.) site is a marvel of ingenuity, whimsy and symbology;
– in addition to the Palacio, there is a well developed pathway system throughout the site which lead to several smaller buildings and landscape features;
– for brevity sake, these include 2 inverted wells spiralling into the ground;
– the more significant one is called Poco Iniciatico (Inititation Well or Inverted Tower) which spirals 9 stories into the ground, the floor of which is decorated in a Templar cross;
– other features in the Park include a small Roman Catholic Chapel, tunnels, lakes, grottoes, fountains and an abandoned aquarium;
– designed in the primitive style, the Park contains symbols attributed to Freemasonry, Knights Templar and Rosicrucianism.