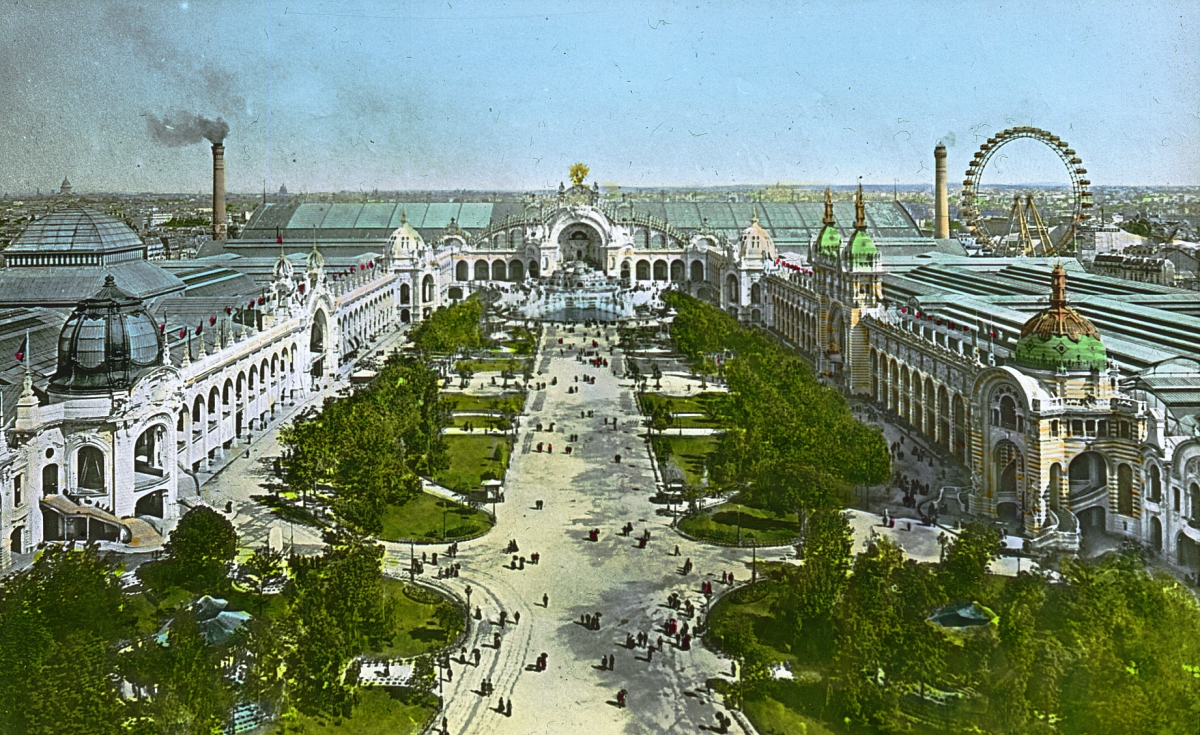 2nd most prominent location on the Champ de Mars, opposite the Eiffel Tower

Paris Exposition 1900 marked a run of 5 world fairs hosted by the nation of France. By far, it was the largest and most successful. To set it in context, we must step back to the previous 1889 Exposition which was significant for four reasons:

The Palais de l’Electricite et l’Eau was the 2nd most dominant structure in the Expo next to the Eiffel Tower, whose life had been extended by an additional 10 years. The following is an extract from the Hatchette Guide:

“The Palace of Electricity’s imposing façade joins the two avenues of pavilions on the Champ de Mars. The façade is composed of nine bays covered with stained glass and delicate translucent ceramic decorations. At the centre is a scroll stamped with the unforgettable date: 1900. At night, the entire faced is illuminated by 5,000 multicolored incandescent light bulbs, eight monumental lamps of colored glass, and lanterns sparkling on the pinnacles and along the upper ramps. In the evening this openwork frieze was a veritable luminous embroidery of light and shifting colors. Crowning the Palace is a chariot drawn by hippogryphs, the Spirit of Electricity, which projects showers of multicolored flames.”

Quoting Arthur Chandler: “By the end of the exposition, France could congratulate herself on having hosted the most successful exposition ever staged…….. Paris herself had shown the world that the city was in the forefront of technological innovation. The Metro, the Gare d’Orsay and the Pont d’Alexandre opened with the exposition, and the city was richer by two major exhibit halls – the Grand Palais and the Petit Palais – as a direct gift from the exposition itself.”

It is interesting to see how events and places morph over time. The Palais was an astonishing testament to the Art Nouveau movement only to be de-constructed following the closing of the Exposition. The Gare d’Orsay was a product of this epoch and has now become the most highly recognized Museum of Art in the world, known as the Musee d’Orsay. On a visit to the Musee in December 2019, the writer discovered the attached architectural rendering hanging in the gallery and paying homage to it’s famous Architect, Eugene Henard. A most unusual tribute indeed, as this is the first time the writer has ever encountered a building rendering featured in a major Art museum.

But what of the legacy? Here are my thoughts: