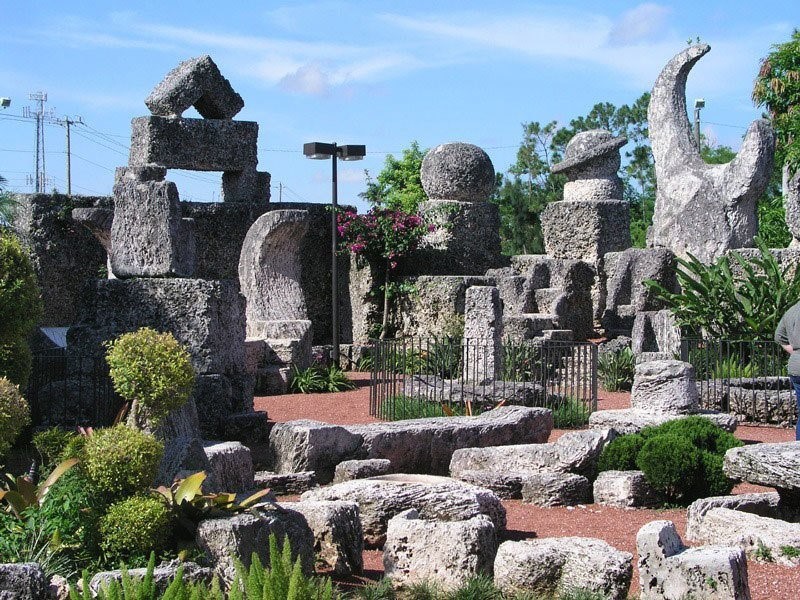 Edward Leedskalnin emigrated to the US from Latvia after he was left standing at the altar by his fiancé. He never married. Asked why he made Rock Gate his life’s work he responded, “for my sweet sixteen” and asked how he made Rock Gate, he claimed to have solved the secrets of the pyramids. According to ES Fein, Ed loved research. “He researched what he called Double Helical Magnetic Interaction and it was through this type of magnetism that he claimed to be able to move mountains.”

The site is a collection of interesting paradoxes. The pieces, for the most part, are made from single stones that average 14 tons with the largest, the sundial and the obelisk 27 tons each. These two also stand some 25’ (7.6m) tall. In one corner of the site, stands a small 2-story structure which housed Ed’s living quarters on the 2nd floor and his tool shed on the ground. He crafted a wide variety of elements on the site including a telescope, barbecue, fountain, celestial planets and stars, and a water well. Several pieces of furniture were also created including chairs, a table in the shape of Florida, beds, bathtub and a throne.

It was all quarried, moved, shaped and place by ONE man over 28 years !

Ed Leedskalnin lived from 1887-1951and Coral Castle became his life’s obsession.. Some would label him an eccentric. Whether or not he did indeed unlock the secrets of the pyramids or Stonehenge, others would call him a genius as somehow he translated his vision into reality. He absolutely refused to allow anyone watching him work so he conducted his activities at night so his proprietary building techniques appear to be also lost forever.

According to Fein “Genius comes in the strangest forms.”

thanks to Erin Willis, Ed.D.