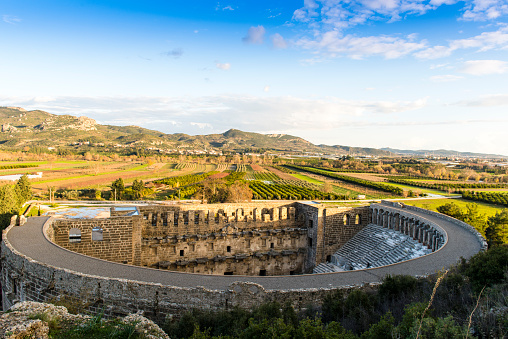 Aqueducts: From the above diagram, one can see the typical gravity system employed by the Romans – ingenious engineers, they were able to calculate free flow systems that would cover many kilometers in order for the water to arrive at a city’s Castellum ( distribution tank). In the case of Aspendos, not only did they build a system, but it was fraught with challenges as it could not flow downhill all the way to the City. The solution at Aspendos is unique. Borrowing from the field of hydraulics, they developed a 2-siphon system that actually pressurized the water in order to get it to its destination.

All communities require a source of water to exist. The Aspendos aqueduct probably functioned for about 150 years and likely succumbed to an earthquake, decimating the city and it’s some 20,000 inhabitants.

Theater: The two components of the theater, the auditorium and the skene (stage backdrop and actor changing areas) are remarkably well preserved at Aspendos.

According to records, the Architect was a Greek, born in Aspendos by the name of Zeno. What is remarkable is the balance between the seating areas, the skene and the integration into the landscape. I’ve read estimates of between 7,000 and 15,000 seating capacity but in actuality, it’s probably closer to the lower end. The theater is still in use today for cultural events, most prominent among them – the Aspendos International Ballet and Opera Festival.

Quoting Roger Hansen, “No matter how close to the next city or how far from the Roman capital,every town in the Empire was entitled to a full infrastructure: the protective wall, the paved streets, the gurgling fountains, the monumental baths and the majestic aqueducts.”…….. and not to forget, an Amphitheater !

o The Romans were renowned for their militaristic skills in creating one of the largest Empires in history. It must be recognized that this colonization could not have lasted without their massive infrastructure initiative – roadways, like the Appian Way and aqueducts that criss-crossed civilization as they controlled it.

o And what of culture? You can’t have a city without a center for the performing arts, so the Theater became the backbone of most Roman communities, even on the fringes of their Empire. The theater at Aspendos contradicts the present state of the aqueduct as it is known as the best preserved Roman theater from antiquity.